The Facts of Addiction and Crime

As a recovering alcoholic, I can say from personal experience that 'manic' behavior (mania - mental illness marked by periods of great excitement, euphoria, delusions, and over-activity) increases as an effect from substance abuse and/or use.

The ability to make 'sound' decisions and respond to stimuli becomes distorted. A person that is under the influence of a substance, begins to make decisions based on emotion and not logic. As the levels of toxins increase in your body, the less responsive a person physical body and psychological 'being' becomes.

When I used to drink beer, whiskey, rum, etc, things I would not do on a normal basis, I would be doing while I was under the influence. I was able to rationalize my behavior and actions by telling myself that I have a full time job, I help take care of the kids, pay the bills, etc. My brain would rationalize anything and everything, whatever it took for me to justify to have a drink when I got home.

I got a DWI about 10 years ago, actually the day before my 23rd birthday. I had been drinking all day to celebrate my birthday, which was the next day. I ended up in a car accident in the parking lot of my apartment building, because a 16 year old girl, backed out in front of me and I broad-sided her. I was arrested and put in jail with a gross-misdemeanor DWI because I had a BAC level of .34 (over 3 times the legal limit). I firmly believe a Higher Power placed that car in front of me, because I was coming back from the liquor store with another bottle of whiskey and would have mostly likely drank myself to death, on accident, in a pure state of mania / insanity.

I tell this story because it is extremely imperative to understand that people under the influence of a substance do not Respond to Situations, they REACT. There is a major difference between the two.

A reaction is something that your body does as an immediate response to a stimuli. For instance, you hit your 'funny-bone' or the doc taps your knee to check your reaction, those are automatic human reactions.

A response is a way to handle a situation / result of a stimuli with logic and a preset plan. For instance, a person can 'train' their body to have a healthy response to a negative situation. Identifying and recognizing the stimuli, the cause of a feeling and how it is effecting blood pressure, heart rate, sweating, anxiety attack, etc. The human body is actually able to psychologically train itself with the correct instruction/therapy to regulate itself when in distress. I learned specific ways to do this at Hazelden Treatment Center in Minnesota and will share the methods in a later Blog this week. 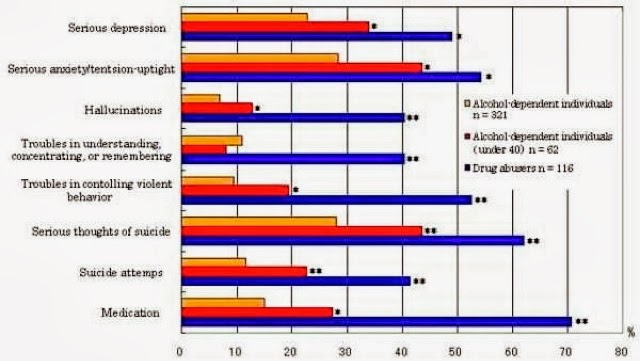 There is an increase of young adults with having a serious, untreated mental disorder that is linked to mania, depression, anxiety, anxiety, etc. People are looking to filling the void and numbing the pain with drugs and alcohol to escape the pain. The use of these substances are directly limiting brain activity (communication with all portions of the brain), brain development and causing brain damage.

The result of this is leading to death by overdose, manic / life-threatening behavior, suicide in teenagers around in world, United States, Cities, Towns, etc.

If you suspect a person is using illicit substances (including, but not limited to narcotics, stimulant medications in an abusive manner, alcohol, sniffing /inhaling aerosoles, bath salts) you MUST TELL SOMEONE & REPORT IT!!


Please leave a comment and feedback.
Posted by Unknown at 10:47:00 PM