The Increase of Diagnosed Disorders

Millions of people around the world have diagnosed mental illnesses.  In a most recent study completed by the ‘National Alliance on Mental Illness’, 1 in 4 adults were reported to experience mental illness in any given year.  In more significant diagnoses, 1 in 17 adults live with illnesses such as: schizophrenia, major depression or bipolar disorder.

Facts and statistics about youth can even be considered to be more frightening to our community, society and how the next ‘generation’ is developing.  Studies show that approximately 20% of youth ages 13 to 18 experience severe mental illnesses and 13% of youth ages 8 to 15.

With the statistics rising at a considerable high rate, one would wonder why have the numbers jumped up so high since the early to mid 2000′s.  There is a lot of speculation of the use of substances by the individual, pregnant mother, ‘Big-Business’ and the diagnoses methodology improving.  I believe both cases are true and ‘spot-on’.

Mental illnesses / disorders cost America $193,000,000,000 (193 Billion) in lost earnings per year.  Mood and mental disorders alone are the third highest cause of hospitalization in the country. 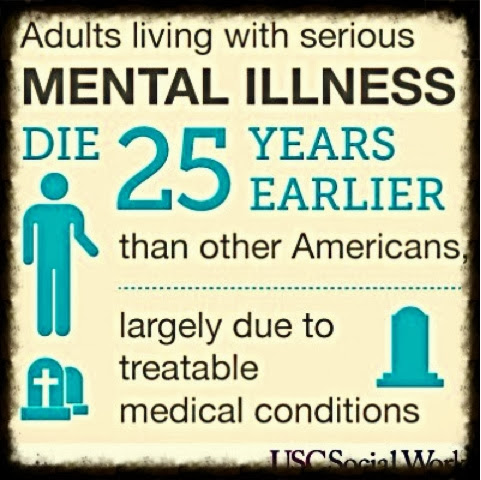 As a functioning member of society and a person that suffers from both bipolar and addiction disorder, I couldn’t believe the astounding statistics as I have been doing my research.  The amount of money it is costing America to REACT to the mental illness and addiction disorder is outrageous and  can be reduced by proper early identification.  In allocating funds to research and early intervention/treatment of these disorders and illnesses, then RESPOND to the people living with these conditions.

This sounds cliche, but I look and sound like the guy standing in an office and working on research projects.  I am that guy standing next to you working on the project and trying to meet the deadline…  The difference is, I can barely afford my daily medication and I have the blessing to have the proper treatment and care for my addiction and mental disorder.

Cancer is not shown on the sleeve of people that have it and neither are some mental illnesses and addiction (which are life threatening diseases if not treated properly).  When someone has breast cancer, they are not viewed as being ‘weak’ or a ‘drag’ on society, but when someone is schizophrenic, they are viewed as, ‘weak’, ‘pathetic’, an ‘animal’ that doesn’t deserve to stand in the same grocery line as the next person.  I hear people say frequently, ‘well there goes another one of my hard earned tax dollars going to waste’ when looking at a person suffering from a hidden illness.

Scientists, doctors and researchers are finally beginning to be able to show patterns of brain activity, structure, connectivity, etc and relate it to specific diseases / illnesses.

It is crucial and critical that we as a community, country, world, continue to prepare all people to have a meaningful life.