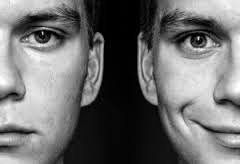 Bipolar disorder is a lifelong illness and episodes of mania and depression can occur rapidly if a person does not seek proper treatment.  There are several types of bipolar disorder that are listed below.

Bipolar I - Bipolar I often involves periods of severe mood episodes from depression to mania.

Mixed Features - Mixed Features refers to the occurrence of simultaneous symptoms of opposite mood polarities during manic, hypo-manic or depressive episodes.  It's marked by high energy, sleeplessness, and racing thoughts. At the same time, the person may feel hopeless, despairing, irritable, and suicidal.

Bipolar disorder can look very different in different people. The symptoms vary widely in their pattern, severity, and frequency. Some people are more prone to either mania or depression, while others alternate equally between the two types of episodes. Some have frequent mood disruptions, while others experience only a few over a lifetime.

In the manic phase of bipolar disorder, feelings of heightened energy, creativity, and euphoria are common. People experiencing a manic episode often talk a mile a minute, sleep very little, and are hyperactive. They may also feel like they’re all-powerful, invincible, or destined for greatness.
But while mania feels good at first, it has a tendency to spiral out of control. People often behave recklessly during a manic episode: gambling away savings, engaging in inappropriate sexual activity, or making foolish business investments, for example. They may also become angry, irritable, and aggressive—picking fights, lashing out when others don’t go along with their plans, and blaming anyone who criticizes their behavior. Some people even become delusional or start hearing voices (helpguide.org) 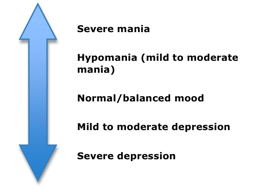 Common signs and symptoms of mania include:
Bipolar disorder is an illness to take very seriously as mood swings can violently change without warning.  Treatment through medication and meeting with a psychiatrist are often needed for an individual to live a successful and peaceful life.